You are here: Home > Latest > Fear, Faith and Sex 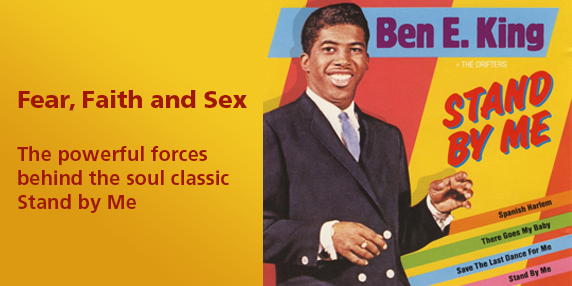 The powerful forces behind the soul classic Stand by Me

The 1960 song Stand By Me has been recorded by hundreds of artists, from the Beatles to the Royal Philharmonic Orchestra. It’s also become a karaoke favourite and a popular choice for school choirs and orchestras. However, many people are surprised when they learn the song has its roots in a spiritual yearning expressed by slaves. Duncan Bartlett has been tracing the religious and psychological sources of Stand By Me.

Stand By Me is such a well known song, it’s difficult for singers to do anything fresh with it. That does not stop them from trying, sometimes with unfortunate results.

I was dismayed when I found a reggae version by Meatloaf, recorded in the mid-1980s during the sessions for the Rocky Horror Picture Show soundtrack.

In 2014, Miley Cyrus performed a stadium rock version, dressed in a skimpy green leotard, as her audience held torches aloft and her guitarist laid down licks.

Florence and the Machine decided to give the piece a tasteful makeover by adding strings and timpani drums when they recorded it for the soundtrack of the Final Fantasy video game.

Some versions of Stand By Me are real toe-tappers, such as the belting rendition by John Lennon from 1973. The Beatles recorded it during the Let It Be sessions but never released it.

And I found the song’s performance by the Kingdom Choir at Harry and Meghan’s royal wedding in 2018 very moving. Nevertheless, my all time favourite version of Stand By Me remains the one released in 1960 by the Drifters.

The songwriters are credited as Jerry Lieber, Mike Stoller and Ben E King, who sang on the record. I assume Jerry Lieber wrote the lyrics and Mike Stoller composed the music, with Ben E King making a huge contribution to the song’s classic status through his vocal interpretation.

The opening lines set a dramatic scenario: “When the night has come/ And the land is dark/ And the moon is the only light we'll see…”.

For the next stanza, Jerry Lieber, a Jew, sought inspiration from the Old Testament. As the sky tumbles and the mountains fall into the sea, we are hearing an allusion to Psalm 46.

Both psalm and song share rich metaphors about love and reassurance but their focus is different. In the Bible, faith in God overcomes anxiety. In the pop song, it’s “Darling” who takes one’s fears away.

However, I don’t want to belittle this romantic idea as I believe it acknowledges a deep human need.

The psychologist Dr Harville Hendrix claims that people overcome their fear of the unknown when they fall in love because they regard their new partner as a great protector, who will stand by them throughout their lives.

Hendrix says this is a continuation of an instinctive infant necessity to be shielded from danger by strong adults. During adolescence, when this demand remerges in sexual form, it becomes the primal force behind every romance – and every heartbreak.

That sounds like ideal material for pop songs, especially when the night is falling and the land is dark.

So when I hear Stand By Me, it triggers a sensation of romantic intensity: a time when love seems to overcome all fear, even a fear of the destruction of the world.

Yet alongside the upbeat versions by John Lennon and Meatloaf, there are also many slow and poignant interpretations by singers such as Tracey Chapman, which remind us that we rarely seem to have this need fully met because other people always let us down.

Inevitably, the dynamics of our relationships shift as we journey through life. For most of us, the person we want to be with at the age of 13 is unlikely to be the one we choose to be bound to forever. As I think back to my own teenage infatuations, I recall a talk given by one my church’s youth group leaders. He reassured us that Jesus doesn’t abandon us like our flaky boyfriends or girlfriends. He is the “Darling” we can always trust.

In modern terms, I suppose you could claim that Jesus never ghosts us or swipes right. But that sort of metaphor quickly begins to sound ridiculous, and I am sure that comedians would have a lot of irreverent fun by portraying Jesus Christ as a gender-fluid lover with a celestial smartphone.

Nevertheless, the writers of Stand By Me seem to have invited God to watch their little romantic drama from the wings. God's presence is signalled by a memorable verse from the Bible which appears in the middle of their song. This suggests that they knew all along that they were channelling a spiritual force, as well as a sexual one.

Six years after Ben E King had a hit with Stand By Me, Elvis Presley went into the studio to record a different version of the song, which brought God out of the shadows – and sent “Darling” off the stage.

Elvis sang: “When the storms of life are raging/ Stand by me/ When the world is tossing me/ Like a ship out on the sea/ Thou who rulest when wanted/ Stand by me.”

Once more, the Bible provides inspiration. This time, the focus is the stories from the Gospels, in which Christ calms the raging storm and walks on the water of the Sea of Galilee.

Jerry Lieber and Mike Stoller wrote many hits for Elvis, including Hound Dog and Jailhouse Rock. However, they are not the songwriters credited on the version of Stand By Me which Elvis cut in Nashville in 1966. His version of the song was by Charles Tindley, an African American gospel composer, and was probably written in around 1905.

The second part of Tindley’s song says: “When I'm growing old and feeble/ Stand by me/ When I do the best I can/ And my friends misunderstand/ Thou who never lost a battle/ Stand by me.”

The song is a personal expression of Tindley’s Christian faith. He was born in the American South in 1851 and as a child, was hired out as a farm labourer, which must have been a dehumanising experience, akin to slavery.

Tindley went on to become a hymn writer and an ordained minister in the Methodist church. Many of his compositions draw from the spiritual songs which he knew from the fields. He also had a deep knowledge of the Bible and even learned Hebrew through a synagogue in Philadelphia.

If he were alive today, I wonder how Reverend Tindley would feel about the many versions of Stand By Me which have been sung in the past 115 years? Would he be  disappointed that his prayer to God has became a love song to “Darling”? Would he sense that he has been cheated that white performers and songwriters used his ideas to make themselves money?

It is something of a miracle that versions of Stand By Me continue to move people emotionally. Yet personally, when I hear the song reinterpreted in a clumsy or thoughtless way, I feel it does a disservice to the memory of the African American slaves who developed its concept in the first place.

I believe the song deserves to be respected, both in its religious and its romantic forms. Powerful forces drive its appeal and these are more fully appreciated when one considers the song’s important place in the story of black music.

Duncan Bartlett is a deacon at Bloomsbury Central Baptist Church.

Watch Again the Provoking Questions session, where Duncan is joined by Nav Arles of the London International Gospel Choir for a discussion of the song 'Stand By Me'. To watch the two versions of the song discussed in the video, please follow these links: https://youtu.be/Us-TVg40ExM and https://youtu.be/9Aqu8aLqHcU