You are here: Home > Latest > The subversive coded message behind the pub singalong

The subversive coded message behind the pub singalong 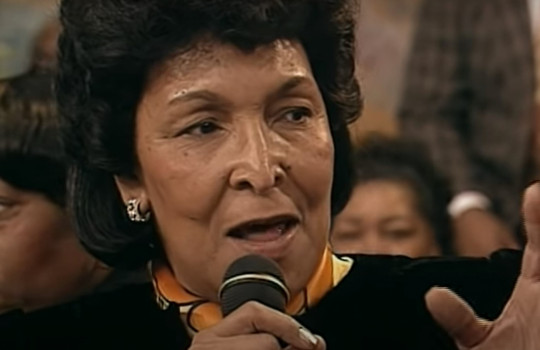 After a few pints, many sports fans burst into song. However few drinkers realise that some of the words they sing come from the Bible, or that their favourite songs may have originated as the defiant cries of slaves.

I am thinking of asking the landlady of my local pub, The Boot, to use the large TV screens which are usually used for sport to show episodes of Songs of Praise.

It is, after all, the flagship programme of religious broadcasting on the BBC.

It recently included an item about Bloomsbury Central Baptist Church, which featured an interview with our minister, Reverend Simon Woodman and a segment about our supercool deacon – and internet celebrity – Fifi.

Despite this, I have to acknowledge that Songs of Praise has an image problem, and is regarded as the TV equivalent to a cup of lukewarm tea served to those confined to home on a Sunday.

So why show it in the Boot, which according to Trip Advisor is “a spit and sawdust pub away with lovely barmaids ready to serve you a top notch creamy pint of Guinness”?

Well, evidence suggests that many of the Boot’s punters enjoy singing Christian hymns.

Often, on a Saturday afternoon or evening, I have heard their voices join together in extremely loud renditions of Swing Low Sweet Chariot or When The Saints Go Marching In

There’s no need to actually enter the bar to enjoy these songs. With the zeal of missionaries, the men proclaim the words of scripture on the streets, sometimes until 30 minutes after closing time.

What the singers may not have considered is that some of the Christian hymns that have crossed into the secular domain have their origins not in sporting triumph, but in slavery and oppression.

Swing Low and When The Saints are examples of what are termed 'Negro Spirituals' – although I use that term with caution, recognising that the word Negro is tainted by its use as a racial slur.

The songs come from a period in American history when the descendants of people who had been taken as slaves in Africa created their own form of church music. The words and ideas of their songs had roots in the religion professed by the slave owners: Christianity. Spirituals always included material from the Bible.

“In many cases, the form and language of these spirituals was actually very subversive” says the Reverend Stephen Hance, who led a discussion about African American gospel music for the Wednesday evening series Provoking Questions at Bloomsbury Central Baptist Church.

Stephen suggested that one way of reading the lyrics of Swing Low Sweet Chariot is to regard it as a coded call to run away from the laborious work of picking cotton in the fields to join the secret escape routes which were used by slaves in the American South to flee to Canada, or the free states where slavery had been abolished.

“It may actually have been a song about getting out of here; a call to get off this plantation and go north,” says Stephen. The escape route was often referred to as the Freedom Railroad, although the train and tracks were metaphorical. Other spirituals referred to the gospel train, bound for heaven or the promised land. The music suggests that even when physical escape is impossible, people’s longing for spiritual freedom remains undiminished.

A similar idea echoes through the words of words of When the Saints Go Marching In. During our Wednesday evening discussion, I made the point that in African American Pentecostal churches, the word saint is used to refer to a Christian, rather than a historical figure, or a person of special virtue.

When the saints go marching into heaven, the implication is that they will do so as a proud community. In my view, this song expresses an aspiration for solidarity, respect and progress. Its vision of heaven is the antitheses of the experience of the slaves, whose African communities had been divided and whose people had been chained and humiliated.

The song is apocalyptic, taking much of its imagery from the Book of Revelation. So when I listen to it, I recall some of the many sermons about Revelation I have heard from our minister, Reverend Woodman.

Simon takes the view that the book of Revelation is a literary creation presented as a 'dream', with vivid layers of metaphorical language employed to create a subversive coded challenge to oppression in the human world.

For the Reverend Hance, Revelation’s message fits well with another important Biblical theme: the exodus of God’s chosen people from slavery in Egypt.

“This great miracle in the past, this mighty act of God, is that God led his people out of slavery and into freedom in the promised land. It gives us confidence in the equally unbelievable act of God in the future, which is that as Jesus was raised, so shall all be raised and reborn,” says Stephen.

I know that this is rather a lot to take on board during a chat over a creamy pint of Guinness in the local pub. That’s why I recommend that if you’re interested in the roots of gospel music, you might enjoy our fortnightly discussions on a Wednesday evening as part of the Provoking Questions series.

And if you’re really keen to hear the songs at high volume, you’re welcome to join the informal London choirs as they give their own interpretation of the hymns at the Boot, or the spiritual homes of rugby and football;  Twickenham and Wembley.

Duncan Bartlett is a deacon at Bloomsbury Central Baptist Church. Rev Stephen Hance is director of evangelism and witness for the Church of England.

You can join the course by contacting Simon Woodman for the link: https://www.bloomsbury.org.uk/contact/