You are here: Home > Latest > What does it mean to “Hold On” when bound by slavery?

What does it mean to “Hold On” when bound by slavery? 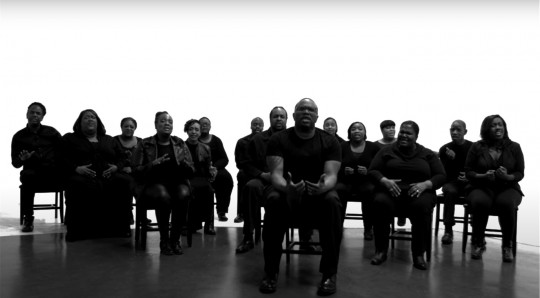 The slave-era spiritual “Hold On” has become a gospel classic, reinterpreted hundreds of times over the past two centuries. Noah, Jesus and the Virgin Mary all appear in the lyrics. Yet its message is a direct challenge to white Christians who attempt to justify racism.

You can watch the discussion on this song at the Bloomsbury Provoking Questions Study Group here: https://youtu.be/BT5pieSV5Ss

To watch the two versions of the song discussed in the video, please follow these links: https://youtu.be/TfvLZjofEXA and https://youtu.be/rGJBrvBHvpM (please be aware that this version contains scenes of violence that some may find disturbing).

You can also watch the previous discussion on the song 'Mary Don't You Weep' here: https://youtu.be/yx6BTBWu4UA

To join the course please contact Simon Woodman for the link: https://www.bloomsbury.org.uk/contact/ 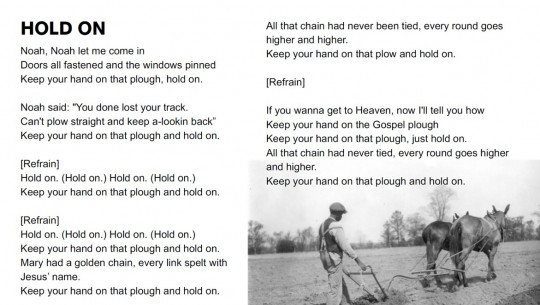 We don’t know when the song “Hold On” was written, nor who wrote it, so we cannot go back to old interviews with the composer to find out what it means.

Our interpretation is bound to be influenced by our own experiences and theological outlook. Nevertheless, as we consider its meaning, we can put what we hear into context.

There was probably not one single writer of this song, nor is there one definitive version.

It was adapted and updated over a long period of time and it has remained relevant because of its powerful core message: an urgent call to hold on to faith and hope in dark times.

The song originated in the time of slavery in the Southern United States. It was one of hundreds of songs created by slaves, initially in the period

When they were first published as sheet music, these type of songs were referred to as “Negro spirituals”, although that term has fallen from use, because of the problematic use of the word 'Negro' in other, defamatory contexts.

Most spirituals draw upon the stories of the Bible. The composers found many connections between their experiences and the characters in the Bible’s great dramas: Noah and the flood, Daniel and the lions, the resurrection of Christ and, most of all, the liberation of the enslaved Children of Israel from the Egyptians, as recorded in the book of Exodus.

I have made a study of some of these songs and I have come to the conclusion that although the religion of the African American slaves of this period in history seems at a superficial level to be similar to that of their white masters, it was radically different.

Songs like “Hold On” use the language of the Bible to challenge oppression. This is not a call to be compliant in the slave system: it is a challenge to injustice.

I’d like to share a quote from a judge in Alabama from this period. He said that slaves should be taught Christianity because “it increased their value as honest and faithful servants and labourers.”

Nowadays when we think about values, we think about virtue. We might consider whether or not a person is living in accordance with a certain moral code, or if their actions are in accord with the values they profess.

But in the slave system, value takes a different and more disturbing meaning. It means how much a slave costs at auction. Enslaved Africans were not regarded as people by their white overlords: they were seen as property, to be bought and sold, like cattle.

The religion of the slaves and their songs were wrought from this traumatic experience. It is therefore inevitable that the music expresses a passionate yearning to be free.

The singers asserted over and over again that even though black lives did not seem to matter to white people, black people’s souls do matter very much indeed to God and to the Lord Jesus.

As I listen to spirituals, I am moved by the way they affirm the dignity of the singers. Each time they are sung, even in the modern era, they are the most profound expression of soul music.

In contrast to the white judge who saw Christianity as a means to manipulate people to make them more docile – and therefore more expensive on the auction block – a black preacher from the period had a very different message for his congregation.

I want to quote the minister directly, even though his words contain a word which was used as an offensive racial slur. But I’ll tell you what he said because I think it’s significant in this context:

One key concept to this type of spirituality is that God is community.

Or to be it slightly differently, God is the community.

These songs do not ponder about whether God cares about the lives of black people. They claim God as part of the family.

In other spirituals, we hear that God is a mother to the motherless, a father to the fatherless and an ever present hope in times of trouble.

These songs do not express doubt about God’s care or justice. Ultimately, God will put things right. God will release to the captives and invite them into Heaven.

The pressing issue is not the reliability of the Lord but whether the pain and sadness of this world will cause the community to lose faith.

“Hold On” is a call to solidarity. Its message is as urgent now as when it was written. It cries out to the community of believers: no matter what oppression we face, we must hold on to faith, and hold on together.

Duncan Bartlett is a Deacon at Bloomsbury Central Baptist Church