You are here: Home > Latest > Listening to Dr King: A Bloomsbury Journey 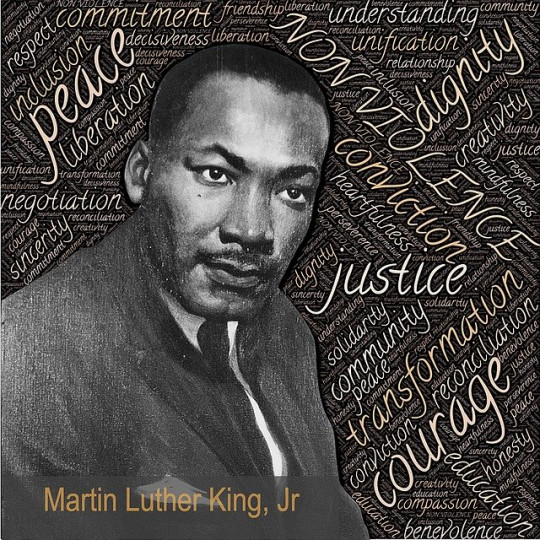 An iconic figure of the 20th-century civil rights movement, Dr Martin Luther King Jr (1929-1968) was also a Baptist preacher whose uplifting words have dazzled and inspired countless people around the world. Between February and June 2021, members of Bloomsbury Central Baptist Church listened to the powerful voice of Dr King through a series of recordings and reflected on his theology, example, legacy and relevance for our times. This page introduces those recordings, providing basic background information and some memorable quotes from each of them.

Dr King penned this sermon at the age of 27, while being pastor of the Dexter Avenue Baptist Church, and re-used it at least fifteen times between 1956 and 1962, making various adjustments to the text to engage with diverse audiences. In this “imaginative attempt to stab the conscience of the American churches about the race question” (Ralph G Turnbull), Dr King reads a fictional letter from the Apostle Paul to denounce segregation as a “dangerous evil” entirely at odds with Christianity and democracy. He also urges churches to take a clear stand on that issue. At that time, Dr King was involved in the Montgomery Bus Boycott and had had his home bombed by unknown aggressors due to his emerging role in the civil rights movement. Hearing this sermon on the radio, future activist and Congressman John Lewis (1940-2020) was greatly impressed: “That day, listening to Dr. King, it gave me the sense that things could change.”

The Church on the Frontier of Racial Tension

Dr King gave this lecture on April 19th, 1961, at the Southern Baptist Theological Seminary in Louisville, Kentucky, before an auditorium packed with 1,400 people. Having already become a prominent national figure, Dr King was also very active internationally, linking the fight for racial justice in the United States to decolonisation. In the speech, he dwells on the theme of global interdependence, referring to his recent “trip to the land of Gandhi”, and broaches the topic of economic injustice, which will feature more prominently in his preaching during the subsequent years. In 1961, King’s early support for the Freedom Riders, impatience with the Kennedy Administration, and emphasis on segregation being a system that “damages the soul” which no “true witnesses of Jesus Christ” could tolerate were not universally welcomed by Southern Baptists.  In retaliation for having hosted Dr King, several congregations - mostly from Alabama and Mississippi – decided to withhold funds to the Seminary, which suffered a substantial income loss as a result.

A quote to remember: “Maybe we have spent far too much of our national budget establishing military bases around the world rather than establishing bases of genuine concern and understanding. All I am saying is simply this: that all life is inter-related. We are caught in an inescapable network of mutuality, tied in a single garment of destiny. Whatever affects one directly affects all indirectly. As long as there is extreme poverty in the world, no man can be totally rich even if he has a billion dollars.”

The Three Dimensions of a Complete Life

Dr King gave this sermon on many occasions and settings, including Bloomsbury Central Baptist Church on October 29th, 1961, the first time he preached in the United Kingdom. Drawing on the Book of Revelation, he used the image of the new Jerusalem to call people to a life of equal length, breadth, and height. One of the most powerful statements of Dr King’s rich and subtle theology, the sermon also highlights the moral and pedagogic value of non-violent resistance to racial oppression by arguing that “the arc of the moral universe is long, but it bends towards justice.” This remark was of high significance at a time a growing number of civil rights activists were risking their lives across the Deep South and King himself was frequently criticised by Black nationalists for his allegedly naïve way of challenging white supremacy. A more detailed analysis and contextualisation of the sermon from Revd. Dr Simon Woodman can be found here.

A Christmas Sermon on Peace

The last Christmas sermon of Dr King, which he delivered at Ebenezer Baptist Church on Christmas Eve 1967, focused on achieving peace on earth and includes several references to his outspoken opposition to the Vietnam War. While scholars have provided different explanations of why Dr King’s message and rhetoric grew apparently more radical in the mid-1960s, this sermon suggests that a profound consistency can be found between his theology, his embrace of non-violence, and his rejection of war as an effective means to bring about peace, in South East Asia or elsewhere. By reaffirming the value of Agape, Dr King went on to state – echoing his 1963 address at the March on Washington – that he still “had a dream”, despite the brutalities he witnessed and suffered from. It is worth stressing that King’s then-controversial views on Vietnam cost him support from many liberal allies and were deemed “a tragedy” for having “diminished his usefulness to his cause, to his country, and to his people” by the Washington Post.

Remaining Awake through a Great Revolution

Delivered less than a week before his assassination, this sermon sheds light on Dr King’s understanding of poverty as the most visible manifestation of a wide range of structural inequalities underpinning and crippling the United States. As the sermon reveals, Dr King’s concerns were deeply informed by his approach to Christianity and by his vision of the Beloved Community, an original concept he developed building on the Social Gospel tradition. From Dr King’s perspective, poverty goes well beyond hardship and the material aspects related to that condition. Poverty – not unlike segregation – leaves the poor exposed to losing dignity and self-respect because of their abysmal status, and entire communities to writing some of their members off, thereby destroying the moral fibre of society. Conceived in preparation for the multiracial 1968 Poor People’s Campaign, this sermon bears witness to Dr King’s commitment to the values of social justice and economic democracy and is a testament to his burning faith.

A quote to remember: “Somewhere we must come to see that human progress never rolls in on the wheels of inevitability. It comes through the tireless efforts and the persistent work of dedicated individuals who are willing to be co-workers with God. And without this hard work, time itself becomes an ally of the primitive forces of social stagnation. So west help time and realize that the time is always ripe to do right.”