You are here: Home > Latest > Review of The Black Church: This is Our Story, This is our Song, by Henry Louis Gates, Jr.

A Review of The Black Church: This is Our Story, This is our Song, by Henry Louis Gates, Jr. 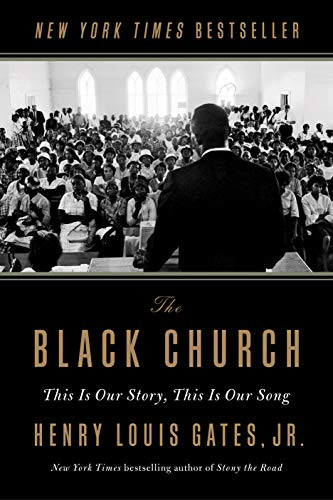 Note: This book accompanies the TV Series of the same name, which is available to watch via streaming services.

This book offers a survey of the history of the black church in America. The “Song” aspect of the title is important, as the black church was subversive and the white church knew it was threatened, because the white church and white politics are so intertwined as to be inseparable. The black church therefore had a fine line to walk and talk to avoid being destroyed. The price to pay could be high, with churches burnt and people lynched. However, through song ideas could sneak in metaphor past the ears of those not paying enough interest.

The TV Series has four parts, echoed in the structure of the book, which adds an introduction and an epilogue.

The first part looks at from where, both culturally and physically, the slaves had come. Together with who had transported and imported them. The Catholic heritage is shown to be as important as the Protestant, with African having a considerable influence, along with Muslim influence (lots of slaves from West Africa had a Muslim background). Anglican missionaries had wanted to convert the slaves to a ‘full’ understanding of Christianity, however the slave owners recognised the dangers in that and opposed it. The slave owners wanted docility, illiteracy and blind obedience. Gates explores the problems of Anglicanism being the church both for the owners and the slaves, and suggests that much of the overt racism from that period was the result of that dichotomy. Come the 1730s and the Methodists/Baptists ‘soul saving gospel’ shook the foundations. Campaigns for abolition followed, and there was a north/south split in the Methodist church specifically about whether bishops could own slaves. This part of the book ends with the Haitian revolution.

The second part, labeled “A Nation Within a Nation” looks at the growth of physical black churches as the slaves invested in praise houses and then churches. Concurrent with this is the American Civil War and the desire of the north to acquire the manpower embodied in the slaves. Promises were made and broken[1]. Out of the chaos left after the Civil War the slaves were freed and black churches could expand both with social and saving gospels. It was no longer illegal to teach slaves to read and the King James Bible becomes the route to literacy. However, there was push back and (Jim Crow) laws were introduced to reduce the rights of blacks. This part of the book finishes with the 15th amendment to the constitution and black people (some of them at least) getting the vote (in theory), but in practice their voting rights are suppressed.

The third part of the book is labeled “God will Make a Way”. It covers the great migration north to Chicago, Detroit and the movement from the land to the factories. One of the results of WW1 was that it cut off the flow of European migrant labour and provided opportunities for black labour from the south. There was no government social support so the churches supplied the health care, education and social support. The church had to choose between radicalism (women in leadership) and respectability (women in houses). Similarly, it had to choose between its music being encased in its church setting or moving, and changing to a more secular setting; summarised as the conflict between Saturday night and Sunday morning. This part of the book goes on to cover Martin Luther King, Malcolm X and the drive for voter registration in the south. It covers the memories of my own youth – the bombings of churches including Sixteenth Street Baptist Church in Birmingham Alabama which led to “On Birmingham Sunday”, a song by Joan Baez.

The fourth part of the book is labeled: “Crisis of Faith” and covers the period from the assassination of Martin Luther King to the present day, from Black Power to the Black Panthers. Stokely Carmichael would argue for violence, while James Cone published “Black Theology and Black Power”. The idea of a ‘white God’ and ‘white Jesus’ was challenged, generating art such as the “Black Madonna”, while issues of gender inequality and sexuality made an impact on the black church. Then came Ronald Reagan and the “Moral Majority”, set alongside Jesse Jackson and Al Sharpton who paved the way for Barack Obama to become the first black president. Gates explores the connection between Jeremiah Wright’s Trinity United Church of Christ in Chicago and Obama’s policies. He goes on to explore movement towards Black Lives Matter, especially the murders in the Mother Emanuel AME Church in Charleston, South Carolina in 2015. This church had featured in earlier parts of the book and it is here that Obama instigated the singing Amazing Grace as part of his eulogy to the pastor killed in the massacre.

That is a brief overview: I got a lot out of this book, it is certainly worth the read.

[1]This was one aspect that intrigued me to follow up. General Sherman designated a large area so that freed slaves could have “40 acres and a mule”. Following Lincoln’s assassination Andrew Johnson reneged on that.
The other aspect that intrigued me was that on one Sunday a church was white and on the following Sunday it was black. From the video I had thought this was an edict but the book clarified it. In 1861 the US Navy (North) captured the South Carolina Sea Islands (South) and the white planters (confederate) abandoned their lands. Newly freed African Americans took control of the church they had been forced to build. One Sunday Brick Baptist Church was white the next Sunday is was black. So not an edict. The side effect of the actions of war.